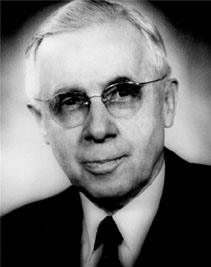 Ernest W. Burgess was NCFR's 4th President from 1942-44 and simultaneously served as editor of the Journal of Marriage and Family Living. He was also one of the three founders of NCFR. He was a prime example of the dedication and passion of our early founders. As secretary those first three years, he communicated nationwide with prospective regional and state interest groups, kept records of the membership dues, was involved in the planning of the first annual conferences, and continued outstanding work as a professor of sociology at the University of Chicago. He was so passionate about scholarship and research on marriage and family, that a special issue of MFL (1952 Vol. 14, no.4) was dedicated to highlighting his research.