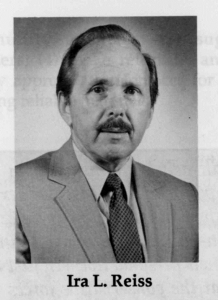 ¶ 1 Leave a comment on paragraph 1 0 Ira L. Reiss, Professor of Sociology at the University of Minnesota and a well-known author, became NCFR’s 37th President. Ira’s autobiography can be found in Pioneering Paths in the Study of Families (Haworth Press, 2001). He was born in New York of a clothing manufacturing family. They moved to Scranton, PA, in the 1930s, where he attended grade and high school. His experiences in Scranton and in the army during World War II led him to the study of sexuality. He graduated from Syracuse University with a degree in business administration, the expectation being that he would join his father in the clothing manufacturing business. He later attended graduate school at The Pennsylvania State University, where he went on to earn a master’s and PhD in sociology, with theory construction as a major thrust and cultural anthropology and philosophy of ethics as minors. Jessie Bernard was one of his mentors. He also attended Columbia University, to gain a different perspective from Robert K. Merton. He married Harriett Eisman in 1955 and began his teaching at the College of William & Mary in Williamsburg, VA. He went on to help establish, with Albert Ellis, the Society for the Scientific Study of Sexuality (SSSS). In 1969, Reiss became a sociology professor and director of the University of Minnesota Family Study Center, replacing Reuben Hill as director. The two became close friends and collaborators on several research projects. Reiss was a prolific author and theorist. He went on to tackle tough societal problems such as HIV/AIDS, rape, teenage pregnancy, and child sexual abuse, which eventually led to several more books and legislative work during Arnold Carlson’s governorship. He and his wife Harriett still reside in Minneapolis.

¶ 2 Leave a comment on paragraph 2 0 The following is excerpted from Reiss‘s Presidential Address:

¶ 3 Leave a comment on paragraph 3 0  Social science research can help us immensely in understanding the basic assumptions and values upon which we base our sexual lifestyles. Knowledge of such basic ideological elements will give us an excellent predictive base and will also provide clinicians and individuals with information that can help them in their work and in their personal lives. In just the last several years, the evidence has mounted that the conservative forces in this country have organized to become an effective force, particularly in the religious and political spheres. Some have taken this as a sign that society is moving to the “right.” However, polls have consistently indicated very little change in the proportion of people who favor various positions on abortion, premarital sexuality, pornography, etc. What has happened is that the conservative forces have organized more effectively and thereby increased their power if not their numbers. The signs are clear that the “left wing” forces are organizing more effectively now and that the 1980s will reverberate with the sounds of conservative–liberal battle over many sexual issues. It is precisely because of this recent organization that ideologies have become more prominent and the ability to obtain a non-ideological view of human sexuality has accordingly decreased. This is precisely the time when a scientific perspective can add clarity and help define the issues . . . Adherents to both major ideologies make claims to scientific support for specific aspects of the various positions they take. It is time that social scientists get off the sidelines and speak to the scientific issues involved in terms of what research has been done and in terms of our theoretical understanding of the situation. If we remain silent, then we will have given up our rightful claim to explain human social behavior even in areas as emotionally charged as sexuality. Of course, science cannot settle which ideology is “best,” but it can deal with scientific questions such as genetic differences between the sexes, consequences of aborting or not aborting, meanings and uses of terms like normality and exploitation, and knowledge of our past sexual customs. Sociology and other social sciences offer a comprehensive perspective on the competing ideologies and an overview of the social scene that is not available elsewhere. 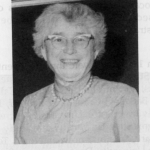 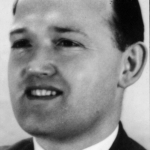