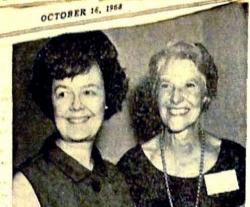 Did you know that between 1940 and 1953, NCFR was managed and coordinated by five executive “secretaries”? (In those days “director” was not a part of the management vocabulary.)

From 1940-42, Mary K. White, a sociologist and demographer from University of Indiana, ran the office on the University of Chicago campus. From 1943-45 the office was managed by graduate students. From 1945-49 Evelyn Millis Duvall, who also served as secretary of the NCFR Board, coordinated the office at a salary of $1 per year.

In 1952, Helen Johanson Hiltner, former publications director of the Butterick magazine, and an editorial staff member of McCalls magazine, was hired. (She was married to Seward Hiltner, President of the Federal Council of Churches, and thus became interested in family life issues.) Mrs. Hiltner resigned from NCFR in April of 1953. During the period of a search for her replacement, Eleanor Smith Litwak was hired part time to run the office.

Armond Willis was hired in December 1954. His Ph.D. was in social work from Northwestern University. He had 14 years of experience in public welfare administration and was a staff officer stationed in Germany during WWII. Willis was also a civil engineer and a cultural and church affairs organizer. His relationship with the NCFR Board of Directors was a tumultuous one, though, and less a year later he was dismissed from employment.

At the same meeting at which the Board of Directors voted to part ways with Dr. Willis, they also voted to relocate the NCFR office to the University of Minnesota campus in Minneapolis. The following year Ruth Hathaway Jewson was hired as executive secretary, a position in which she served for the next 28 years.

Take a look at the attached photo of Ruth Jewson and Evelyn Millis Duvall, and read one of our NCFR newsletters from 1956.