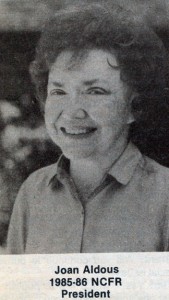 ¶ 1 Leave a comment on paragraph 1 0 Joan Aldous, the 43rd President of NCFR, is the William R. Kenan Professor of Sociology at the University of Minnesota. Her research interests include variations in active fathering and their reasons, and consequences for children of fathers’ care. Her other areas include family sociology, family policy, gender, work and families, and intergenerational relationships. In 1987 she received the Ruth Hoeflin Scholar award at Kansas State University. She also taught at the University of Minnesota and the University of Georgia. Aldous received the Burgess Award for her theory and research contributions in family sociology and has been an elected member of the Council of the American Sociological Association. In addition to receiving research grants from the National Institute of Mental Health and the National Science Foundation, she won a Graduate School Award from the University of Notre Dame for teaching and scholarship. She is the author of over 50 published articles as well as two books and is the editor or co-editor of three other books. She has also served on the National Science Foundation and the National Institutes of Health review panels as well as on the Sociology Panel of the Graduate Record Examination for Educational Testing Services. As NCFR President, Aldous had two goals: (1) to involve more NCFR members in the organization’s activities and (2) to get NCFR on firm financial footing.

¶ 2 Leave a comment on paragraph 2 0 In her Presidential Address, Aldous made the following comments:

¶ 3 Leave a comment on paragraph 3 0 The emphasis on being independent, a central value among Americans, appears in both older and younger generations in the United States. Parents are concerned that they be not only financially but also emotionally self-sufficient. Economically secure parents keep in touch because they choose to, rather than because of obligation or need. This freedom to involve themselves in kinship networks on their own terms can be ended as time takes away health and a spouse dies. But for the present, these newer-elderly are not “poor dears,” dependent upon children who dutifully meet their filial obligations.  And the evidence suggests that the children are not being emotionally or financially short-changed because the parents are electing to choose their involvement. Aging parents, then, like well-fixed adult children, seem to have made a declaration of independence to spend their remaining years according to their own life plans. 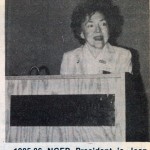