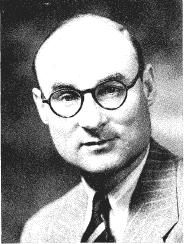 David Mace was NCFR's 19th President. He was a native of Scotland, a prolific writer and world traveler. David Mace has said that he probably never would have thought of coming to the United States if it had not been for NCFR leader, David Fulcomer, whom he had met in London during World War II and who set up a program for him which made the trip possible. He and his wife, Vera moved to the U.S. in 1949. Mace was a professor at Drew University, the University of Pennsylvania, and Bowman Gray School of Medicine. He and Vera served as Co-executive Directors of the American Association of Marriage Counselors. (later AAMFT). Their crowning achievement of the Maces was the founding of the Association for Couples in Marital Enrichment (ACME) still in existence today.