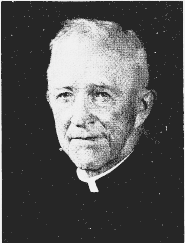 Monsignor John O’Grady became NCFR's 9th president in the fall of 1951. He served a15-month term through the summer of 1953. He was author of a book called "Catholic Charities in the USA" and was a scholar and historian. He served for 32 years as Director of National Conference of Catholic Charities. He was also a sociology professor at Catholic University of America and Trinity College in Washington D.C. He was a pioneer in the development of public housing policy in the U.S. and was also known for his work on aging. He was appointed to the President’s commission on Immigration and Naturalization